ACT or SAT? Everything You Need to Know to Choose the Best Test for You

Knowing which test to take can help relieve some of the stresses caused by the college admissions process. Students usually take the test that has been historically prevalent in their area or school. In the past, the SAT was typically a coastal test, predominant in the East and West Coast regions, while the ACT was more often taken in the middle of the country. The fact is, however, that every college and university in the country accepts both tests. Does that mean that you should take both tests? Not necessarily. Instead, choose the test that is better suited for you, and then focus your time and attention on that test. 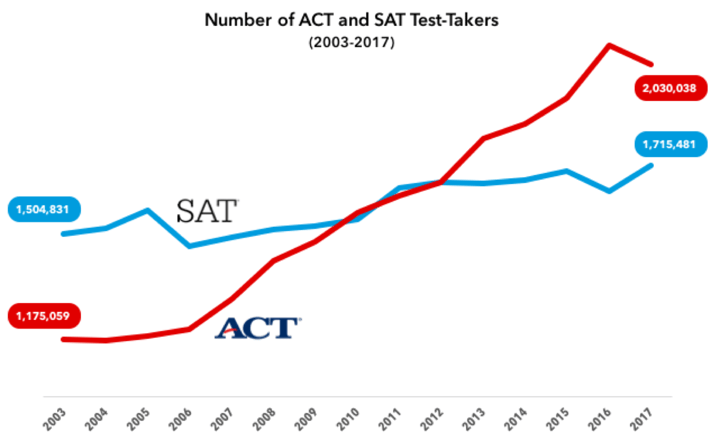 With the release of the new SAT in March of 2016, the College Board closed the gap on many of the significant differences between the SAT and the ACT, which on the surface makes the two tests seem similar.

Both tests now have four sections plus an “optional” essay component. However, be aware that the essay is not optional for all colleges.  If you are unsure of where you will apply, take the essay portion. If you have a list of schools, check each school’s essay requirements. Some schools may not accept your SAT or ACT scores if you did not take the essay section.
Although the tests may be more similar than in the past, there are still significant differences, and these differences may help you determine which test is better for you. While there are many charts available that give a general overview of the two tests, we'd like to dig a little deeper to help you understand the content and approach of each test so that you can make an informed decision.

Pros of the ACT

Cons of the ACT

Pros of the SAT

Cons of the SAT

So What Should I Do?

Don’t simply add up the pros and cons of each test and decide what to do. Instead, begin by taking a practice or diagnostic test of both to determine which test is better for you. If you’ve taken the PSAT or PreACT in October, you can use these scores as solid predictors of how you will perform on the real tests. If you haven’t taken the PSAT or the PreACT, then you can print a free practice SAT test from CollegeBoard.org, or you can find a practice ACT at ACT.org.  Once you have taken both tests, use page 7 of this conversion chart to figure out the test that you should study for and then take multiple practice tests to prepare.  While it is important to do your best on either test to help your chances of getting into most schools and to increase the merit aid awarded to you, these tests are only one aspect of the admissions process.  By far, the most valued part of your application is how well you perform in school, so continue to challenge yourself, work hard, and enjoy the journey.